Asian Handicaps are some of the best bets to have in football. The low margin on them make them better value than the typical 1×2 markets. You can read more about them here but basically, they have a smaller margin. You get some quirks like a home win is 1.95 on the 1×2 and 2.00 -0.5 on the Asian Handicap even though they are logically the same bet. 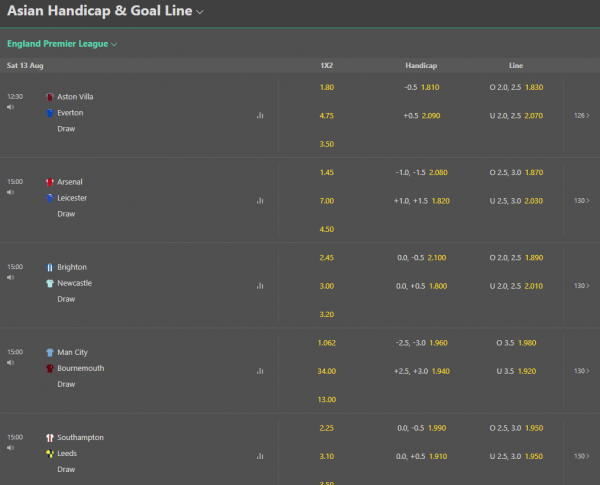 Bet365 have a coupon where you can easily add Asian Handicaps into a parlay. Unfortunately, if you qualify for the soccer accumulator bonus, Asian Handicap markets don’t count. Its only

The bonus is very good if you are eligibale for it. It just shows how good Asian Handicap Accumulators are though as they are ineligible for the offer.

With Asian Handicaps, your bet can push, so you get your money back.  If you had a 4-fold and one pushed, it just becomes a 3-fold (or treble).  You can also lose half which keeps your bet alive or win half which is still a win but half what you would have won.

Most other UK-facing bookmakers don’t have the Asian Handicap coverage that Bet365 have.  They might offer Asian Handicaps but at the margins of 1×2 which defeats the point.

The maximum winnings in any 24-hour period for each sport are detailed below and are exclusive of stake. The maximum winnings are quoted in Pounds Sterling as a base currency in order to ensure consistency across the world but currency equivalents apply for actual payouts.

Where a multiple bet has been placed which involves events with different maximum winnings limits then the lowest limit will apply. All maximum winnings limits apply to any one customer, or group of customers acting together, who have placed bets containing the same selections, including where placed in a series of bets, at a range of prices, over a number of days using different betting accounts and/or across different betting channels. Should we have reason to believe that a number of bets have been placed this way, the total payment of all those bets combined will be limited to one single maximum winnings payout.

– £25,000 for the following markets – Manager Markets, Player to Make Squad, Player to Start Match, Player to be Booked/Sent Off, Player of the Tournament and Transfer Specials.